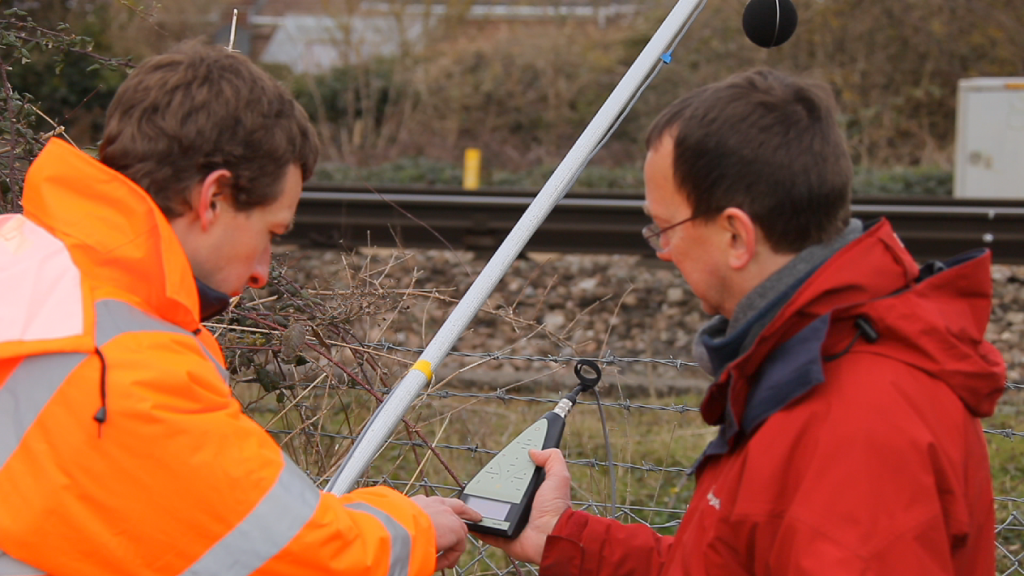 Wheel-rail interaction gives rise to vibration of the track across a wide frequency range. From ~4 to 80 Hz, it is transmitted through the ground and perceived in track-side buildings as ‘whole body’ vibration. The highest levels are usually from freight trains, but a special concern for the design of high speed lines is the possibility of direct excitation of the ground by high speed trains. This resulted in special and costly track/support structure design on HS1. At higher frequencies (~30 to 200 Hz), vibration gives rise to structure-borne noise in buildings from tunnels but increasingly also from at-grade lines. Airborne rolling noise (~50 Hz to 5 kHz) is the most important component of noise from moving railway vehicles up to about 300 km/hr, with the contribution from the track being usually the most significant. Rolling noise is often exacerbated at elevated structures by vibration transmitted through the ballast; this was the subject of a major design study for the Thameslink project.

All parts of the Programme addressing the sleeper, ballast and sub-base have implications for environmental noise and vibration. The dynamic stiffnesses of the ballast (WA2) and sub-base (WA1) are poorly characterised parameters in the modelling of noise, while the effective rail support stiffness (WA5) is important in noise generation. The sleeper type and material (wood, concrete, steel, plastic) also have an important effect (WA2). The dynamic transfer stiffness of the ballast layer (i.e. the stiffness between the sleeper and a substructure in the frequency range up to about 1 kHz) determines the vibration levels transmitted to ground, tunnels or bridges, and is of direct relevance in WAs 4 and 5.

Low frequency ground vibration is dominated by the dynamic stiffness of the sub-base and embankments (WA1)45. Ground vibration also depends on the vertical profile of the track top. It will be necessary to link the vibration studies to how this deteriorates over time (due, for example, to the effects that will be investigated in WAs 1, 2, 4 and 5) for different ballast layers and sub-bases. The variation of the dynamic support stiffness under sleepers (WAs 1, 2 and 5) as an additional mechanism of vibration excitation will also be investigated.

The principal excitation mechanism of rolling noise is surface unevenness (“roughness”) of the rail and wheel. Measurements undertaken in the 1990s indicated that UK rail roughness was relatively high. An extensive programme of grinding was undertaken subsequently, aimed at reducing rolling contact fatigue. The effect of this grinding on current roughness levels and how these levels are related to the track structure are unknown.

During the project, the following additional objectives were agreed:

Ballast layer dynamic stiffness will be investigated in a purpose-built full scale laboratory rig, capable of measuring both the direct stiffness at the sleeper soffit and the transfer stiffness between a sleeper and a bridge deck/formation for frequencies up to about 1 kHz. The rig will be designed to measure stiffness under different loads, across the frequency range. It will also allow the introduction of ‘soft’ ballast improvements including gluing and random fibre reinforcements, sleeper pads and ballast mats. It will be used to measure the stiffness of new and aged ballast and to study the effects of grading etc. An input force impulse from an instrument hammer will be applied to a specially designed half-sleeper, and the response of the half-sleeper and a seismic mass at the base of the ballast layer measured. It will be possible to measure the dynamic material characteristics of other track and sub-base configurations using the same apparatus. The measurements will relate closely to elements of WA5, and the results will be of direct use in the evaluation of impact loads in critical zones of track in WA4.

Numerical models developed at Southampton will be used to analyse the effects on noise and vibrations of the modifications to the sleeper, ballast and track system proposed in WAs 2 and 5 in a variety of subbase and train loading conditions. In particular, the TWINS model, which has been used internationally in wheel and track component design, will be used to investigate numerically the factors influencing the level of rolling noise generated from trains. This model calculates the vibration of the wheel, rail and sleeper. The rate of attenuation of vibration along the track depends on the rail support conditions and controls the noise radiated from both the rail and the sleeper. The sleeper is modelled as a beam on a support whose stiffness represents the ballast and sub-base. Slab track can also be modelled. The effects of different sleeper materials and ballast-sleeper contact conditions will be studied using the measured dynamic stiffnesses obtained from testing different sleepers and ballast conditions in conjunction with WA2. Tests on different sleeper types and materials may also be carried out in situ using the Southampton test track.

Wavenumber finite element and boundary element (WFEBE) methods will be used for the analysis of vibration propagation, to investigate numerically the effects of changes to the materials in the track, embankment and sub-base. Conventional finite element methods are inefficient in this application, owing to the need to model a large domain to prevent wave reflection at false boundaries. In the WFEBE approach, finite elements are used to model the inhomogeneous mechanical properties and geometry of the track, ballast and formation while boundary elements are used to model the ground, achieving an infinite medium for wave propagation. Wavenumber elements assume invariance of the geometry and material properties in the along-track direction. The cross-section is modelled using a 2D mesh but the 3D vibration response to forces is obtained.

A model currently being developed within RRUK (EP/D080207) will be used to investigate the effect on vibration generation of variations in track support stiffness along the track. The model is based on a finite element approach, with interpolation along the rail to allow efficient time stepping and special elements based on dynamic flexibility matrices to model the effect of layered ground on neighbouring sleeper supports and to calculate response away from the track where necessary.

• A test rig has been developed and commissioned to measure the dynamic stiffness of track structure layers. Tests have shown that dynamic stiffness of ballast depends strongly on preload whilst the effects of frequency and ballast depth are comparatively weak.
• A sleeper test rig has been used to show variations in the dynamic stiffness of different sleeper types whilst under preload.
• The absorption of different gradations of ballast has been investigated using a newly constructed 1:5 scale model track. A key finding is that in terms of noise the absorption of the ballast appears to be of greater importance than its stiffness.
• Ground vibration has been measured at five sites in the UK with differing track constructions. These have been used to validate and improve prediction models. Results show that the soil types and layering tends to have a greater effect on the transmitted vibration than the ballast stiffness.
• Wheel roughness has been measured of around 150 wheels across three fleets using a newly developed device. Rail roughness has been measured on upwards of ten sites and decay rates on upwards of five. Generally UK rail and wheel roughness has been found to be low compared to historic and standardized values.
• Noise and vibration measurements have been made at six characteristic sites: (i) before and after track renewal; (ii) steel sleeper site; (iii) critical velocity site; (iv) site with under sleeper pads and switches, (v) varying vehicle unsprung mass, (vi) site on a curve with ballast migration. Key findings: Track is noisier at higher temperatures due to lower pad stiffness, renewed track was significantly noisier than unrenewed track due to softer pads. Under sleeper pads have a small but measureable effect on ground-borne vibration.
• A time-domain FE model has been developed that includes the vehicle, track and ground which allows the vibration transmitted through the ground during a train passage to be evaluated. The model has been used to show clear differences in the vibration propagation at critical velocity and subcritical velocity sites. The model has been optimised in terms of computation cost and performance with respect to model size, elements size and type.

Year 5 will principally be a continuation of on-going activities as well as reporting on findings and presenting results:
• The track dynamic stiffness test rig will be used to measure samples of different types of rail pads. Variability between pad types and between pads of the same type will be investigated. The dynamic stiffness of interventions suggested in WA2 will be evaluated as samples become available e.g. reinforced ballast, and under ballast mats.
• The scale model track rig will be used to carry out further tests on ballasts absorption. Different ballasts compositions will be tested in addition to interventions proposed by WA2 (e.g. reinforced ballast).
• The implications of new track designs on noise will be evaluated as an input to WA5 (improving system performance).
• Results from laboratory tests of track stiffness and field test of ground transmitted vibration will be sued to validate and improve prediction models. These models wil then be used to predict the implications of new track design on vibration as an input WA5.
• Models have been developed to predict the influence on variations of track support stiffness on ground-borne vibration. I possible, long wavelength loaded track unevenness measurements will be made to provide data to validate these models.
• Further wheel roughness, rail roughness and decay rate measurements will be made as sites become available.
• Work is planned to further optimize the time-domain finite element found vibration model to allow larger models and also to introduce soil non-linearity.
• The effects of proposed interventions (e.g. under sleeper pads, soft rail pads, under ballast pads) will be quantified in a form suitable to provide and input in to WA6 (economic modeling).